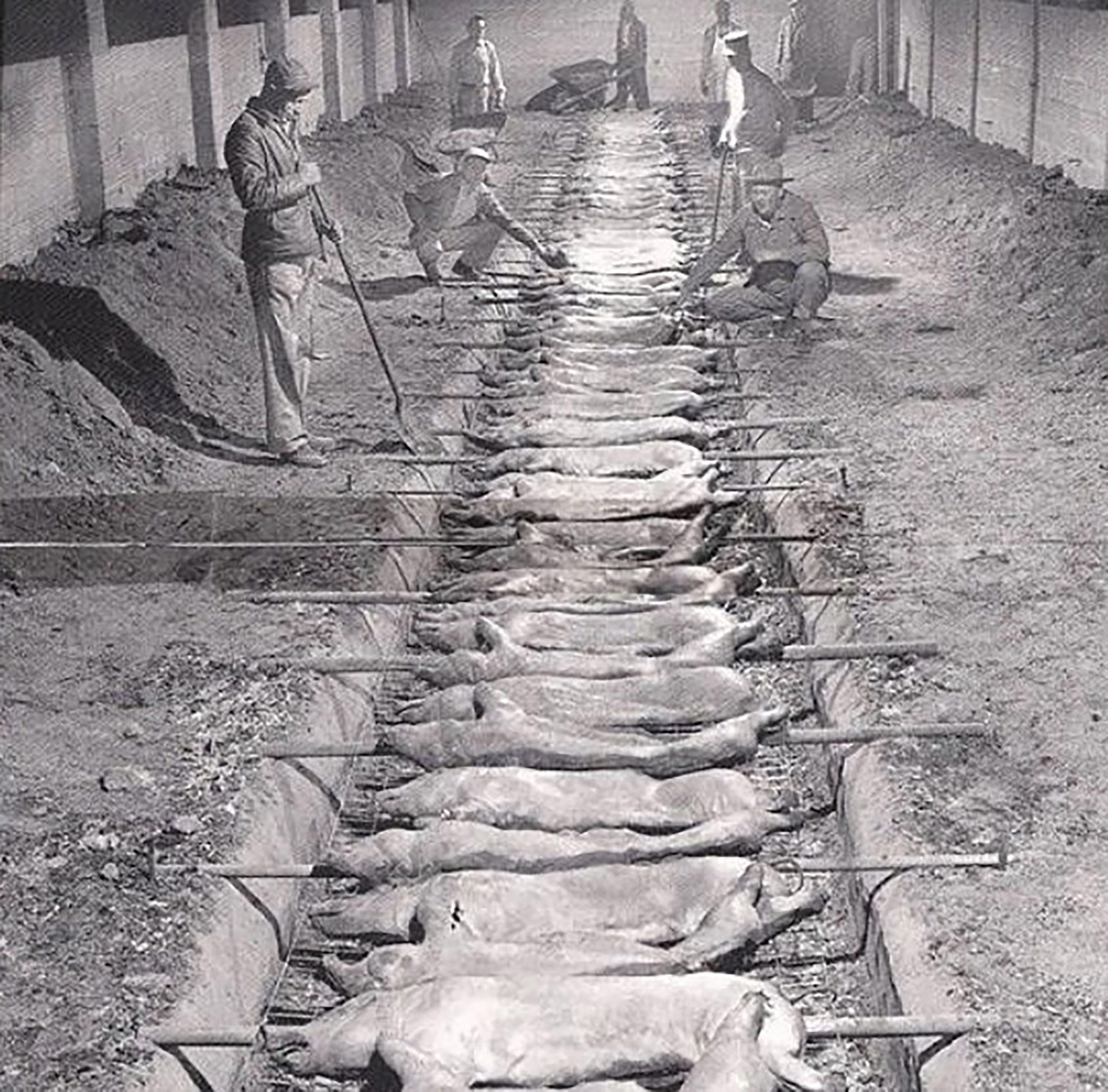 The deep connection between hogs and agriculture in Eastern North Carolina, the land that reared me and my ancestors, began long before settlers and enslaved people came to these parts. Humans domesticated the pig thousands of years ago. The animal’s genetics arguably date back to around 7000 B.C. in Western Asia, and history notes that the Roman Empire made great strides in pig breeding.

By 1500 A.D., both Northern and Southern Europeans had integrated swine into husbandry practices and their respective cuisines. They learned to breed this animal for versatility. The pigs of Northern Europe possessed a muscular and stocky build and those of Southern Europe, used exclusively for lard and curing, required a smaller, lean build.

The pig ate everything, reproduced prodigiously, and its meat was easily preserved. It was first introduced to the Americas by Spanish Explorers in the Tampa Bay area of present day Florida. Hernán Cortés introduced hogs to New Mexico in 1600, while Sir Walter Raleigh brought sows to the Jamestown colony in Virginia in 1607. Pig production in America spread rapidly as it was a highly valued animal resource and commodity that became extremely vital for early colonists who were learning to survive on strange land. Original colonists from the tidewater region of eastern Virginia began exploring the South along the Outer and Inner Banks of eastern North Carolina, while settlers in Charleston, South Carolina explored north into the sandy Pee Dee Region of eastern South Carolina and Wilmington, North Carolina. The settlements they established became what was once called the Province of Carolina named after King Charles 1 of England. In 1729, the Province of Carolina was divided when the descendants of seven of the eight Lords Proprietors sold their shares back to the Crown.

Most people who settled here lived solely off the land, on usually five acres or less, growing crops for subsistence, and raising hogs and other livestock in which they preserved or sold to wealthy city dwellers, or travelers, on the wagon roads. In early days in East Carolina, hog pens were kept in the woods near fruit or nut trees and their waste was used to supplement the sandy soil of the garden. It took discipline and endless hard work to live as a farmer in this frontier, but options were limited other than labor in the easter pinelands building ships for the British Navy.

Native Americans heavily influenced agrarian culture in the Carolinas. They introduced Europeans to tobacco and other native medicinal wild plants, and taught colonists hunting and trapping techniques for use in the swamps, rivers, and game lands. Europeans traded with Eastern Carolina Native American tribes such as the Waccamaw, Mehherin, Sapony, Lumbee, Coree, and the Tuscaroran. Farming practices by both cultures were shared, too, prior to the breakdown in relations which resulted in feuds, and eventually war and displacement. In exchange, colonists introduced Native Americans to the domesticated pig. Barbecue as a cooking technique (roasting the entire animal in a pit over wood and wood embers) had been adopted by colonists after watching Arawak natives in the Caribbean and enslaved Africans practice the craft.

I grew up near the Tuscaroran settlement and Native American town of Toisnot in present day Elm City, North Carolina. My family tree dates back over 300 years to some of these first Europeans settlers of the Carolinas by way of Jamestown, Virginia, as well as Charleston, South Carolina. My ancestors were subsistence farmers like so many in this region. I was raised with stories passed down through the generations, a first hand connection to farming, hunting and the land as a way of survival. The pig played a vital role in these tales.

According to family lore, the families that settled where I grew up were often very large with strict roles assigned to every child by the age of six. Some children were farm hands, others were cooks, but all of them toiled and labored through their respective chores daily. Raising the pig was a most important part of the farm chores. A pastured farm pig ate vegetable scraps and roots and grubs from the ground. It was often fed turnips, sweet potatoes and corn in order to fatten the animal just before it was slaughtered.

Hog production in Eastern North Carolina has evolved from these humble roots to become a global commodity. Today, Wilson and nearby counties host sprawling pig-raising operations. Instead of supping on a farm’s garbage, pigs today are great sources of their own waste. Acres surrounding these farms mass produce row crops like tobacco, corn, soybeans, sweet potatoes, and cotton. Along the country roads that connect the farms and cities, long-running barbecue restaurants serve thousands daily.

Since the late 1800s, tobacco farmers prepared a barbecue to celebrate the harvest and the tradition is as deeply rooted in the dirt as the hog itself. The first tobacco men were undoubtedly African Americans. Enslaved people, who became sharecroppers and tenant farmers after Emancipation, stoked fires in tobacco barns, where the leaves were cured after harvest, throughout the day and into the night. They would often sleep on the ground in the barn to keep close watch on the coals, adding more wood, fanning embers, extinguishing those which were too hot, and keeping close eyes on the tobacco as turned from green to brown. This arduous work took precious time and technique, and would continue for weeks until the leaves were properly dried and cured. Enslaved people perfected this process. Elders passed the craft down to younger generations, and as time passed, the technique crossed racial lines. There was an understood reputation and a revered respect for this important job on the tobacco farm.

My very first paying job in Eastern North Carolina was farming Brightleaf tobacco in 1990. At summer’s end, I remember gathering in the dining room of Parker’s Barbecue waiting to share a barbecue meal with those that worked the harvest with us. I didn’t realize at the time that this was tradition. Downtown Wilson, the city near my home, was once the “World’s Largest Tobacco Market.” The harvest, sale, and cure of tobacco funded construction of its historic downtown in early 1900s. Tobacco warehouses encompassed eight city block. Back then, every tobacco farmer (from the Piedmont to the Atlantic Coast of North Carolina) would bring their crop, hauled by mule and wagon, into Wilson, where it would be graded for auction and sale. Numerous straw-floor barbecue restaurants populated downtown Wilson fed farmers and businessmen alike.

Prior to the industrial revolution, which brought the gas-powered bulk tobacco curing barns of my youth, barns were stick built and fueled by wood and coal. Oak, magnolia, pecan, and hickory hardwood were stacked in sheds and shelters on the farm, and carried to the curing barns by mule and tractor. A stove was lit on the southside of the tobacco barn, and heat and smoke from the wood fire kept these barns hot as the tobacco slowly roasted and dried. I have always felt an intrinsic connection to the hard work of curing tobacco and the equally hard work of smoking barbecue. This realization came flooding back when I worked the all night hog shifts at Buxton Hall, a barbecue restaurant in Asheville, North Carolina. I remembered my grandfather, who farmed tobacco for over 70 years, waking up three times a night to drive his truck down to the barns and check the temperatures of the cure.

Since 1921, my grandfather, who had harvested and cured tobacco in Wilson, NC, ended every season with a barbecue meal shared among those that worked the fields with him. Historically, the African- American men who kept the tobacco fires cooked this meal, so the “tobacco man,” already an important role, also became the first “pit man.” Under the shelter of the barn, in a cinder block pit fashioned with rebar and chicken wire, they would shovel the blistering hot coals that had been used in tobacco barn stoves beneath a hog. (One hundred years before him, hogs and chickens and other animals of the farm were suspended above similar pits by thick, handcarved wooden stakes driven through their bodies.)

The pit men tended the coals through the night for a celebration the next day. The mahogany hog glistened, popped, and sizzled over bright embers as it was slowly roasted in its own fat. It was carried out of the pit by hand and displayed for all to splendor. Men, women, and children would pick to their heart’s desire and revel in this rare taste of roast beast. This was more than a meal, it was a ‘rejuvenation’ at the end of a long season and the meal served as the rare time when black and white communities came together to share a meal.

As a child I was always most fascinated by history and the things we can learn from it. I came from a place that is steeped in history. My forefathers were involved in volatile American moments: from when settlers tried to coexist with Native Americans, to the fight for a sovereign constitutional government, to the how our nation’s attempt to stitch together a patchwork quilt of difference. Our history has not always come with justice and my passion for where I am from and its history begins with this acknowledgement. The views from my perspective come from a higher place in privilege than many others. As a Southern-born white chef, it’s important to understand the history of where we come from but it is most important to understand how that very history has affected others in time different than ourselves. I believe that some of the most important lessons in life today can come from the history of our forefathers.

How we raise hogs and how we grow and cure tobacco has changed, but both traditions retain a vaunted status in the agrarian culture of North Carolina. People here still work hard and some try to stay connected to the past. We still love to cook a pig slow over wood and we love to share a meal with our neighbors. Time has had no affect on that.